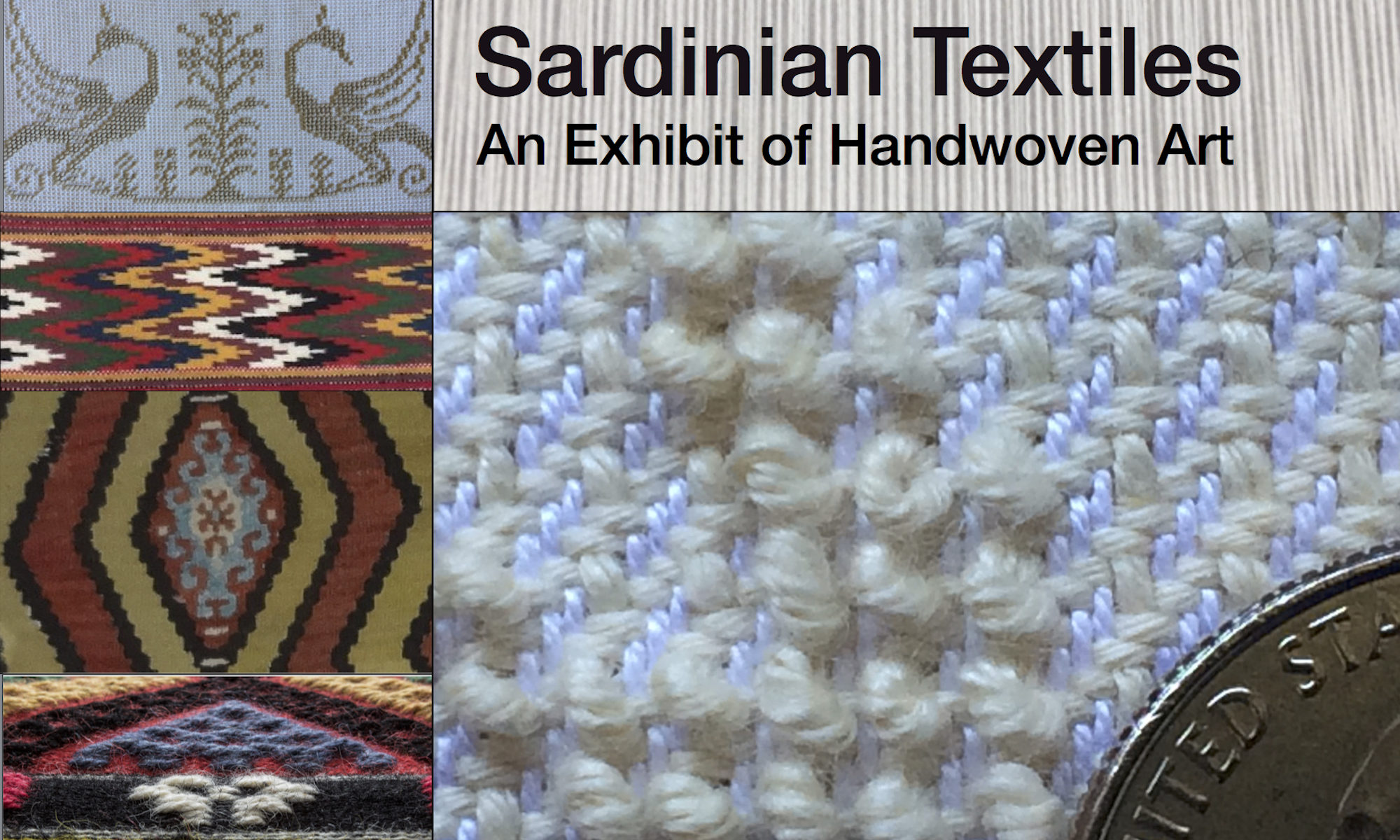 Sardinian Textiles: An Exhibit of Handwoven Art was an international exhibition on display at the Italian Cultural Institute – San Francisco for two months in 2017. The show was a supported by a number of related events, including Intrecciati, an intercultural fiber arts project coordinated between Sardinia, Milano, and San Francisco, and a screening of the film I Want to Weave the Weft of Time.

As the conceiver, producer, and organizer of the show and related events (including the film), I am delighted to say that all were well-received and successful — and the show is my personal favorite among the events I have organized/produced.

The exhibit and related events were three years in the making, and I spent much time working between Sardinia and San Francisco to organize everything. In addition to negotiating several challenging issues and a number of situations too complicated to detail here, I drafted agreements in English and Italian (many thanks to my Italian tutor Gabrielle for refining the Italian versions), paid visits to all artist studios and potential sponsor headquarters in Sardinia, and attended to countless details.

I also designed and wrote all event collateral including postcards, bookmarks, online ads, and the poster advertising the event as well as the educational materials and banner displayed at the exhibit.

Of course, there are many people to thank for their help! See this event recap and thank you (and the Italian version).

If you would like to read more details, here’s a discussion of some of the challenges I faced organizing and producing the exhibit.

This page has information about Intrecciati, the intercultural project.

As people often ask: Yes, the website SardinianArts.com is also entirely my own creation. With the exception of several pages noted as artists describing their work “in their own words”, the writing, photos, videos, and website design are mine.

The Global Peace Initiative of Women Religious and Spiritual Leaders was held in Geneva, Switzerland in October 2002, on the grounds of the United Nations. I filmed and reported on the event as an accredited journalist. This piece was written for a women’s magazine based in Colorado.

From Kelly Manjula Koza’s archives: Of the many events I have organized and run, this inaugural LGBTQ+ event from 1997 is one of my favorites. In addition to this event, I helped organize and publicize smaller GLBTQ+ events for the chamber. Prior to moving to Denver, I was a trained peacekeeper for pride marches in Tucson and the founding vice president of the University of Arizona GLBTQ student club.

During the mid-1990’s, I was on the board of directors for the Colorado Business Council, the Denver-area GLBT (the acronym was shorter then!) chamber of commerce. Their name has has since changed; at that time, we could not use the words gay, lesbian, bisexual, trans, or queer in the organization’s name as homophobia was rampant in Colorado. Even some of the chamber’s leaders were not out in the business world and did not want to be publicly identified with the group.

To better integrate the chamber with the community-at-large and other chambers, gain recognition for gay-owned businesses; promote GLBT issues; and serve as a fund-raiser for the organization, friend Anne, also a board member, came up with the idea of initiating an annual awards ceremony lauding gay- and lesbian-owned businesses and community allies.

The inaugural event in 1997 was a huge success, and the awards ceremony ran for about 15 years before being discontinued due to having achieved its long-term goals. As Elfriede, another friend and former board member said, “The awards and ceremony were phased out because we had been able to honor all of the ground-breaking GLBT business owners, and the chamber and GLBT community has become so well integrated into Denver that having distinct awards for GLBT businesses no longer served any purpose.”

I was thrilled to hear this: The inaugural ceremony had been a pet project of mine, and I had been credited with taking the event from conception to reality. At the time, I was CBC’s Director of Special Events and de facto PR director, and I did everything I could to ensure the first event’s success. I managed details large and small, created processes that I knew would set precedents, penned documents, wrote articles and talked with journalists to secure top local publicity, garnered corporate and business sponsorships, and collaborated with other board members to attract politicians and business leaders to the event and ensure their support of the chamber. The event and people were also a great deal of fun!

A few pieces of the local publicity around the event are below.